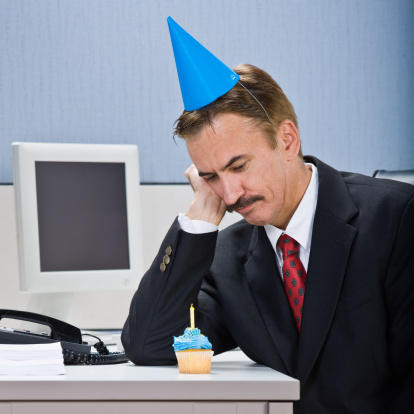 Last year I was working out of a corporate office with an audit team and was sent an email saying that we were celebrating the birthday for one of the team members and to meet later for cake. I didn’t know him well but wanted to show my team spirit. Here was the scenario…

Birthday Guy comes into the meeting room and there are about ten people there and we sing Happy Birthday. A team member cuts the cake and starts to divvy it up. Most partake and a few decline. The guy whose birthday we were celebrating asked for a very small piece. I can’t remember if I saw him take one small bite and throw it away or just throw it away. I asked him if he liked cake. He quietly said he was on a ‘no sugar’ diet and didn’t want it. I could tell he felt guilty for even saying that. The worst part of this whole party was that several people KNEW it! Even the woman who BOUGHT THE CAKE! Yes, I am screaming here because that is the rudest and most selfish thing I can think of at a birthday. When I mentioned it to her, she said that everyone else would eat it.

Seriously, we were not celebrating this guy at all. The office just used his birthday as an excuse to buy cake! Maybe what this guy wanted was just an acknowledgement or a song, something that he actually liked to eat, or maybe nothing at all. I used to teach a class and they knew that I didn’t eat the cookies and brownies that were catered in and always had a fruit salad in the afternoon instead. After the three week class was over, they bought me an edible fruit bouquet. It was one of the most thoughtful and practical gifts I have received, as opposed to a bottle of wine I received at our housewarming from a friend who said ‘I know you don’t like wine but here you go’. Uh….thanks?

I have always worked home-based and being part of that birthday scene made me glad on so many levels. No one should feel guilty on his or her birthday or any other day of the year, for not eating something, ESPECIALLY when the person knows you don’t like it. If you are someone who pressures people to eat the dessert or drink the wine in order to make yourself feel better, take emotional inventory. If you want those things have them and enjoy!! The whole table doesn’t have to join you.

I have been in situations more times than I would like where I felt obligated to share the dessert or appetizer. Later I would ask myself why? It’s not that I don’t ever eat these things, but I don’t eat them all the time and the question was more that I ate them to ‘fit in’ rather than because I actually wanted them. It was like being a teenager and made me feel kind of disappointed that I did something out of guilt or obligation.

Disclaimer: I am talking about work situations. I am not talking about when your kids make you breakfast and pour a half bottle of syrup on it or your grandma makes you your favorite pie not knowing that you no longer eat pie. Unless your colleagues put some sentiment into it, the above still applies!

Don’t succumb to the office pressure to eat “The Office Birthday Cake”, drink the beer or work on the weekends, unless you want to do those things!